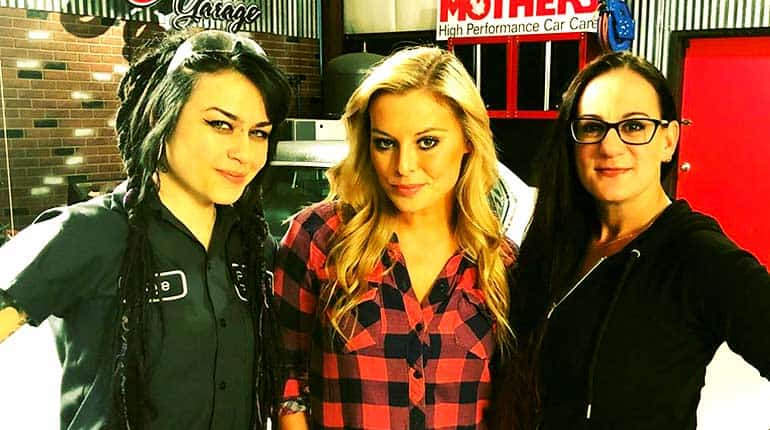 The All Girls Garage cast consists mainly of women. These include the likes of Christy Lee, Faye Hadley, Sarah Bogi Lateiner, and Rachel De Barros. Christy is a 42-year-old motorcycle lover from Daytona Beach. On the show, she works alongside Sarah Bogi, who is another certified mechanic.

In addition to this, she is also a poet and businesswoman. She is the proprietor of 180 Degrees Automotive. The third and most recent addition to All Girls Garage Cast is Rachel, who is a 41-year-old market specialist from Washington DC. Learn more about the cast members’ time on the show in this review.

What is the All-Girls’ Garage?

The All Girls’ Garage is a show that centers on three women and their exploits within the auto-garage they run. The trio deals with complex issues and seeks to prove that they can be as good as men in their industry.

Each episode enables the women to display their great aptitude for all things car-related. All Girls Garage show first aired on March 3rd, 2012. At the time, it was broadcasted by the Velocity Network. They eventually made their way to the motor trend network after a few successful episodes. The show’s eight-year run has seen it air 33 episodes in total, the latest of which concluded last year.

At the moment, fans are eagerly waiting for the series’ ninth season. The series has been directed by the likes of Jack Cella and Matt Allegretti.  The new season of the show is set to premiere on the 4th of April 2020. It will be titled ‘Supercharged ’69 Mustang.’

A significant portion of the series is recorded at an auto-garage based in Central Florida. The cast and crew live close by for convenience.

With 19 episodes under her belt, Sarah is one of the longest-serving members of the series. AGG fans were first introduced to her back in 2017, on an episode titled ’75 El Camino.’ Sarah is a professional mechanic who hails from Queens. Fans of the show love ‘Bogi,’ as she is aptly nicknamed, for the energy she brings. Her expertise in the field of mechanics is unquestionable, especially since she owns an auto shop back in Arizona.

It has helped her accumulate a net worth of $ 5 million over the years. Of course the reality show she stars in has played a key role in acquiring her wealth as well.

Like Sarah, Cristy Lee has also been All Girls Garage Cast since its inception. At the point of writing, she has featured in 19 episodes in total. Her 20th episode is set to feature very soon. Cristy’s introduction to the show came with the release of the 2017 episode titled ‘Grandma’s Grand Prix.’

Cristy’s love for cars has been evident for a very long time now. She has worked with the likes of NBC to cover the Off-Road Truck Racing Competition, for instance. Cristy even found her way to the X-games at one point. So it came as no surprise when she was brought on to star on the show All Girls’ Garage. In addition to her love for cars, Cristy also likes to dance. It is evident with the persona she embodies on screen.

Faye Hadley is one of the main three All Girls Garage Cast. It is evident by the fact that she has appeared in 15 episodes in total, and is set to star in quite a few more when the new season premiers. She first graced our screens on an episode called ‘A Company Truck.’

Since then, Faye has gone on to become a mainstay on the series. Faye is a tech wiz. The show gives fans the chance to watch her handle the most complex engine problems. She has accumulated years of experience at Piston & PixieDust, an auto body shop she runs. At thirty-three, she is the youngest member of the main cast.

Fans of the show first got to meet Rachel back in 2018. She made an appearance as herself on the episode titled ‘El Camino.’ Since then, Rachel has only appeared in one other episode, bringing her grand total to two. She is not set to appear in the subsequent season either, as she left to pursue other interests.

Rachel is no stranger to cars as she worked in her uncle’s garage during the summer holidays. Rachel’s dad taught her everything she needed to know about cars, and how they run. Her time at the garage enables Rachel to acquire skills related to bodywork and necessary repairs.

Jessi is also fondly remembered for her time on the show. She was a minor character and mainly worked as a service girl for the garage until she left in 2014. It came as little surprise that Jessi found her way to the show. All those who knew her well could tell you that her greatest ambition was to become a racecar driver.

Jessi was fortunate enough to be able to explore the tracks around her hometown while she was young, and it nurtured her love for cars. Jessie passed away aged 39 in the Alvord Desert, five years after leaving the show.