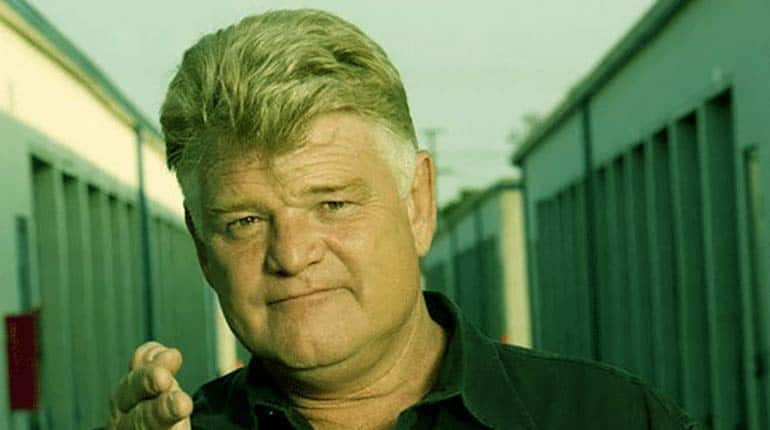 Dan Dotson is a well-known auctioneer. His claim to fame was the “Storage Wars” show that aired on A&E (TV Channel). A very accommodating man, Dan, attends the show together with his wife, Laura Dotson. Learn Dan’s net worth in this review.

Part of the star’s wealth is gotten from the show’s proceedings. He is said to earn about $300,000 from the show. His wife Laura is said to enjoy the same amount of net worth. Dan Dotson has a net worth of $4.5million.

So they are well to do family based on wealth. Dan and Laura Dotson’s net worth will definitely keep increasing with the participation in the show over the seasons. They also still run their auctioneering businesses that generate large earning for them across the United States of America.

The couple lives in a magnificent house in Yucaipa, California. The house measures, 3171 square foot. This is a sign of a wealthy family in the United States and boasts a significant net worth.

Dan’s interest in auctioneering career started when he was only 11 years old. At that age, his grandfather, Sam Fancher, a farm and cattle auctioneer situated in Ozark mountains of Northwest Arkansas, would train him in the trade.

During his school holidays, the young Dan Dotson would love working with his grandfather just to learn the ropes in the trade of auctioneering.

His grandfather, on the other hand, was very eager to teach the young boy the tricks of the trade. They were very fond of each other. Little did he know that he was training one of the best ever auctioneers to be in the country.

He got so passionate about the industry of auctioneering that he would, at times, skip school when he was at the age of 16. The star would take a trip to the Chino auction in California to sell furniture.

He was actually gaining valuable experience at a very young age. Dan Dotson’s $4.5 Million Net Worth is an outcome of all these successful careers and hard work.

Dan Dotson formally got into auctioneering work in 1974. He went on to establish American Auctioneers in 1983.

In the ’80s and ’90s, he used to run an auction house in riverside that fully concentrated in collectibles, porcelain dolls, furniture, and pottery.

Later in 1996, he met Laura, a beautiful lady who he later married and became his loyal and supportive business partner. Now they co-manage American Auctioneers. Their business prides itself in overseeing about three thousand auctions every year. This is quite a huge business.

They have now grown and focus in estates, business inventories, equipment, storage units, foreclosure auctions, fundraisers and appraisals. Dan Dotson prides himself in executing two auctions every day of the week.

Dotson is also the owner of StorageAuctions.net, an internet portal focusing on providing self-storage auction listings throughout the United States and Canada. They made a decision to modernize the business so as to capture all levels of customers across the country.

In December 2010, they were selected by the Storage Wars crew to appear on the show alongside Brandi Passante. Ever since Dan Dotson acted as the primary auctioneer, his wife Laura took the role of the ring-woman in the series. They sometimes switch roles on the show.

Don is the lead advisor and co-founder of, StorageAuctions.net, an internet version of their auction house. They provide self-storage auction listings throughout the United States of America. The couple work as very great business partners.

Dan Dotson has been featured in different published articles including, TMZ,  The Washington Post, and USA Today. The couple is reported in these writings as some of the brains that inspired the idea for Storage Wars.

Dan Dotson Is Married to Wife Laura Dotson since 1996.

Dan from “Storage Wars” is happily married to his lovely and supportive wife Laura.

Laura is just like his perfect match. She has supported her during very tough times and great times while together.

Dan and Laura Dotson tied the knot in 1996, and since then, they have enjoyed each other’s company, both as a married couple and business partners. They went on to be blessed with a son Garrett on January 9, 1998.

Dan Dotson met his wife Laura at Riverside, where he had set up his business. They are a happy couple, and there has been no talk about their separation.

There has been no talk of a divorce. Dan and wife Laura Dotson have managed to keep their marriage for well over two decades. This is not a mean feat for a celebrity and business couple in America.

They play their roles on ‘Storage Wars’ very well making them gather a large following of fans for the show.

Dan Dotson is Not Dead. His Health Issue.

In the year 2014, Dan Dotson from “Storage Wars” underwent a very unfortunate time when he suffered a dire health condition which almost killed him. At the age of fifty-two, he suffered a double brain aneurysm, also known as a hemorrhagic stroke. Due to this the news about Dan Dotson death spread like a wildfire.

Laura rushed him to the hospital. The doctors gave him a 40 – 60% chance of survival due to the severity of the damage in his brain. After surgery, he survived the illness and over time recovered the fatal disease.

His wife Laura would get troubled by his continuous complaints of experiencing double visions. She would contact 911 to help her husband get sedatives that could relieve him. Dan is now much better and back to work in his auctioneering firm, even in his old age.

So, to conclude Dan Dotson is not dead.

Dan was born on November 23, 1962, in California, the land of auctioneers. He is an American nationality of white ethnicity.