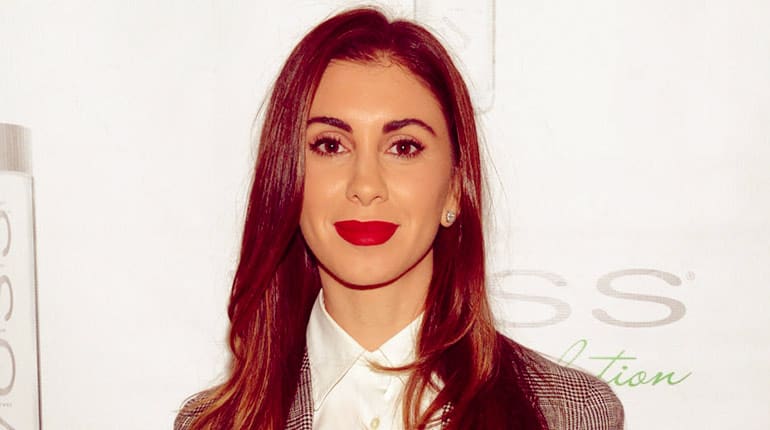 In 2013, Emilia joined the MSC Mediterranean Shipping Company as the head of the legal department. She served the post for only two years.

As of now, she is a senior sales representative for the Commonwealth Land Title Insurance Company.

Well, everyone might be pretty familiar with the fact that Emilia Bechrakis is a married woman. She is Ryan Serhant’s wife. Ryan is a famous American businessman, real estate agent, actor, and reality television star.

Emilia Bechrakis and Ryan Serhant got married on 7th July 2016, in front of 150 guests on the secluded island of Corfu in Greece.

Emilia honored her Greek heritage by exchanging the wedding vows in Pontikonisi church, where they tied the knot in each other’s tradition. They even exchanged crowns.

To begin; the lovely pair first met in 2011 when Emilia was just normally visiting the United States. Actually, she did not have any plans on settling down in the United States but later changed everything, her lifestyle, her motto of life, and everything, just for Bryan. Romantic, right?

Ryan Serhant and Emilia Bechrakis dated for five years before he popped out the question. Do you know, Ryan closed the New York City’s Times Square in 2014 to propose her?

Ryan Serhant and wife Emilia Bechrakis’ love story was not a smooth one. They had faced numerous ups and downs before tying the knot. Ryan and Emilia’s father did not share a good term as her dad is of a traditional mindset who believes in religion. He even forced Emilia to move back to Greece.

After three years of marital life, the duo welcomed their first child, a baby girl, on 26th February 2019. The family of three enjoys a healthy familial time in New York.

Actually, the pair were trying to conceive for around three years but did not a success. So, they decided to use IVF treatment.

Ryan Serhant’s wife Emilia Bechrakis is an attorney, internet media personality, and television personality who is earning a hefty amount of money from her involvement in three professions. Her television career is the primary source of income.

As of 2019, Emilia Bechrakis’ net worth is reported to be around $1 million, whereas earns an annual salary of $200 thousand.

On the other side, her husband, Ryan Serhant’s worth is $20 million. The millionaire couple definitely leads a lavish lifestyle.

There is no exact proof and information regarding Emilia Bechrakis’ plastic surgery, but a couple of sources have questioned if she has done any surgeries on her lips. The sources believe that her lips look a slight different these days.

Emilia Bechrakis stands at the height of 5 feet 6 inches and weighs around 60 kg. She has a pear-shaped body built. Her body measures 36-27-35.5 inches, whereas she wears a bra of the size of 34B. Her shoe size is 8. She has brown eyes and brown hair.

Emilia Bechrakis Wiki And Other Facts

The 34 years old television personality was born in Athens, Greece, and currently resides in New York, the United States of America. She holds dual nationalities’ Greek and American, whereas her ethnicity is Greek. She follows Christianity.

Her favorite actor is Robert Downey Jr., and the actress is Jennifer Lawrence. She loves to travel, shop, and read during her leisure time. Her dream holiday destination is Paris.