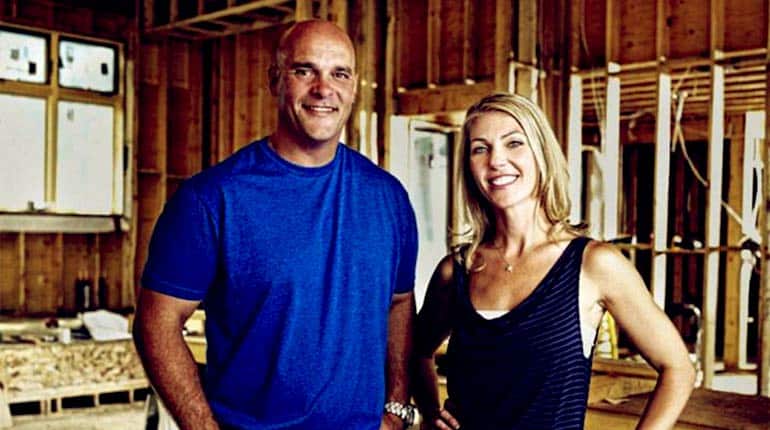 Bryan Baeumler is a Canadian television host, judge, and businessman who has appeared in a series of television shows alongside his wife, Sarah Baeumler. His wife is also a television star and fashion designer who co-hosts the Island of Bryan alongside him.

Everyone might be familiar with the fact that they are a married couple, but how many of you are aware of how and when the pair tied the knot? When the pair first met each other?  Scroll down to know every detail of their marital life and children as well, right below:

Bryan Baeumler, no doubt, enjoys a healthy marital life with wife Sarah Baeumler. The lovely pair is a college sweetheart who first met at the Appleby College in Oakville. Since then, they were in touch. However, they did not start dating right after.

Bryan and Sarah re-united after a decade falling in love with each other. The couple dated for a couple of years before exchanging the wedding vows on 3rd September 2004. They tied the knot at Graydon Hall Manor located in Toronto.

Nearly after fourteen years of marriage, the Bryan and wife Sarah Baeumler renewed their wedding vows.

How can someone forget about their unplanned engagement? Actually, Bryan planned on to propose her overlooking the ocean during a hike. But things did not go as planned. Because of the fog, they neither could see a thing nor had a perfect walk.

Likewise, when they were returning home, the car got a flat tire. However, overcoming all those obstacles, Bryan managed to pop out the question.

As of now, Bryan and Sarah lead around fifteen years long conjugal life with no issues of divorce and separation issues. Love, care, respect, mutual understanding, and passion for renovation and designs might be the reason behind such a strong bond.

Bryan and Sarah are blessed with four children in total. The pair shares two boys and two girls. The name of their two daughters is Quintyn Werner Baeumler and Charlotte Anne Baeumler, whereas their sons are Lincoln Wolfgang Baeumler and Josephine Judith Baeumler.

Quintyn is the first child of Baeumler couple. She was born in 2006, two years after her parents tied the knot.

Happy 12th birthday to my beautiful, bright and compassionate daughter Charlotte. I am forever amazed by how much you have grown and the kind, young woman you are becoming. I love you very much! 💕 xx Mummy pic.twitter.com/mWMKaMnook

Lincoln is the pair’s third child and first son. He was born in 2011 and is nine years old, as of 2019. Bryan even posted a picture on his Instagram.

During interviews and posts, the couple has made sure that they would do anything for their kids.