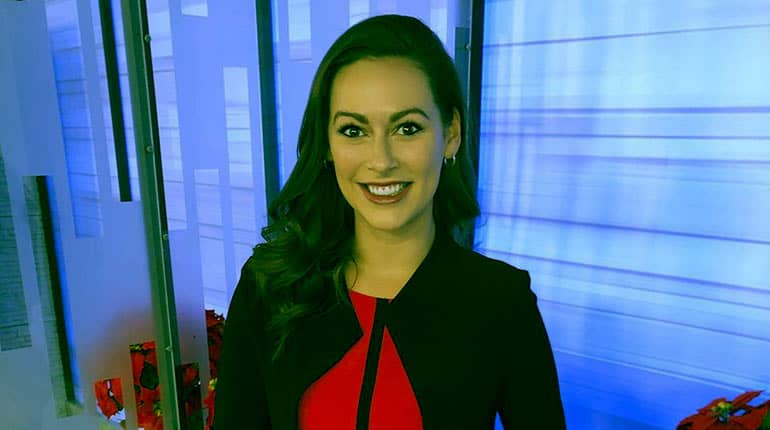 Kaitlin Sharkey is a broadcast journalist and sports correspondent. The Wisconsin native initially made a name for herself on WBAY TV-2, a station founded back in 1953. Kaitlin’s educational background includes a stint at the University of Milwaukee, where she studied journalism.

After this, the broadcaster went on to cover all events related to the Green Bay Packers. Presently, she has been assigned to work at a new station. So is Kaitlin Sharkey married to a husband? Get your answer right here as we take a look at all the interesting facts about her.

Who is Kaitlin Sharkey?

Kaitlin Sharkey is a sports anchor affiliated with the FOX News Group. Kaitlin’s career trajectory can be traced back to her time with WSAW, which is a branch of CBS based in Wausau. She spent most of her early career covering various American Football matches. By March 2017, it came to light that the news anchor was making the switch to Fox 6 in Milwaukee. On her part, the bubbling journalist was excited to be heading back to her hometown.

It proved to be her dream move, and she went on to cover the majority of the sporting events in the area. Her time with the network-enabled her to work with the likes of seasoned journalists such as Brandon Cruz and Tim Van. Last September, she was at Miller Park, covering a Brewers Baseball match. The Wisconsin born journalist has also experimented with radio broadcasting.

Just last year, she was one of the hosts on 97.3 who interviewed Bucks General Manager Jon Horst. Kaitlin Sharkey was also at the Kohl Center alongside photojournalist Mike Leach to cover a basketball game. On April 6th, 2020, she announced that she was making a move to Chicago to work with FOX 32.

How old is Kaitlin Sharkey? Measurements.

Kaitlin Sharkey was born on May 11th, 1990, in Theresa, Wisconsin. Presently, she is 29 years old. The journalist’s 30th birthday is looming around the corner, so that we will update this in a few short weeks. In as far as her star sign is concerned, she is a Taurus.

The sports anchor cuts quite the imposing figure. A lot of people describe Kaitlin as a tall drink of water, and looking at her photos; it is not hard to see why. She stands at an impressive 5 feet, 10 inches tall.

The journalist also has a very toned body, and it is evident that she is in shape. It is not surprising as she works on television; most television personalities are required to stay fit.

Is Kaitlin Sharkey Married to a husband?

It is a question that has been brought up quite a few times of late. Some sources report that she is married to a man named Tim Yoder. However, we were able to confirm that these reports were completely unsubstantiated.

Not only do the two live in different states, but a look at their social media handles gives no inkling that they even know each other. The sports anchor is a beautiful woman in the prime of her career. Suffice it to say; we are confident that there has to be a suitor or two in her life. Whether Kaitlin Sharkey is married to a husband or not remains a question, we are yet to answer. So stay tuned for any new updates.

The sports anchor is fairly active online. She has accounts on Instagram, Twitter, and Facebook. On Instagram alone, Kaitlin has a following of over 5,000. She uses this site to showcase some of her work during various sporting events. Her page also tells us that she just recently made a move to Chicago after a long stint in Milwaukee.

Kaitlin’s Twitter page has just under 9000 followers. She also uses this to keep fans informed about everything going on in her life. Just recently, she advertised her scheduled appearance on I Heart Radio.