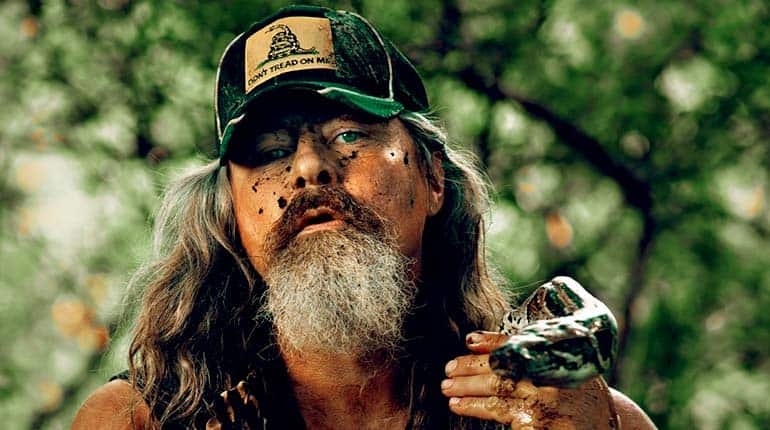 Dusty Crum is a hardcore reptile hunter, television personality, and entrepreneur. Some of his greatest accolades include the world record, which he holds for catching an 18 foot Python. Remarkably, trapping snakes is a passion he has had since he was a kid, which would explain his tough demeanor.

After a plethora of years hunting the vicious snakes on the Florida Everglades, Dusty moved on to other reptiles, and subsequently television. Learn more about Dusty Crum as we put the hunter’s life under a microscope. By the end of it, you’ll get to know more about Dusty’s net worth and biography.

Who is Dusty Crum?

Dusty Crum’s name is synonymous with the History Channel show, Swamp People. The series follows the likes of Dusty Crum and R.J. Mollinere as they traverse about the expansive swamp region of Southern Louisiana.

Fans were first introduced to the hunters on the 22nd of August 2010. The showrunners have given us over 180 episodes to date. This has been for 11 seasons. Dusty joined the show in its tenth season and has featured on five episodes so far.

After his popularity skyrocketed, the History Channel offered him the chance to lead his reality show, Guardian of the Glades. It first premiered on the 28th of May 2019, and though it’s only one season in, it shows significant promise.

Before he found his way on to our television screens, Dusty used to work in construction. He handled menial tasks such as pouring concrete and digging ditches.

In addition to this, Dusty is also a proud business owner. He runs Orchid Envy alongside his long term girlfriend. The two sell leather and python based products at their store to support other bounty hunters.

The reality star’s hunting credentials go back to his youth, particularly along the Everglades, where he honed his skills. Dusty enjoyed a good relationship with the Florida Fish and Wildlife Conservation Commission. The organization sought specialists like Dusty, who helped them control the population of the Burmese pythons.

This is because they have adversely affected the ecosystem. The snakes diminished the population of exotic rodents and rabbits as well.

Dusty Crum also worked with another organization, the South Florida Water Management District. This is after they set up a preservation program that aimed at capturing pythons. Despite the fact that there were about 1000 applicants, only 25 made the cut. Dusty was amongst the lucky few to be hired as an official bounty hunter. Their compensation was also dependent on the size and length of the snake.

Rather than kill these snakes, however, Dusty handles them with absolute care. He avoids using traps and instead uses his bare hands.

The snake hunter does not earn much in regard to his profession. Dusty Crum earned roughly $ 8 dollars an hour while working for the district conservation organization. At the start, he was paid 50 dollars for every four snakes longer than four feet. With regard to his entrepreneurial exploits, we learned that Dusty not only sold python made materials but also ran a flower show.

Dusty also featured two significant reality shows that have helped lay the foundation for his net worth. However, the exact details surrounding Dusty Crum’s net worth presently under review.

Dusty Crum is a reptile hunter whose life is almost entirely shrouded in mystery. As such, details regarding his age remain unknown and under review. Judging by Dusty’s pictures, however, we estimate that he is in his early 50s at the moment.

Dusty Crum is in a relationship.

The reality star, Dusty Crum, is in a committed relationship. He is dating a woman named Natalee Mckinney. She is a native of Sarasota and celebrates her birthday on the 16th of January. Like Dusty, Natalee is also a reputable snake hunter.

A glance at her social media will reveal that she is not afraid to tussle with large snakes. The two have been involved with each other since 2002. This translates to an almost two-decade-long relationship. They are not married yet, however, nor do they have any children together presently.

Dusty and Natalee also run Orchid Envy together. The couple is very supportive of each other’s goals. Most recently, they were spotted together at the Python Bowl 2020 in Florida, where Dusty was competing.

Strange does not even begin to describe Dusty Crum. For one, he goes hunting barefoot. The man is also reasonably superstitious. Fans of his show are well aware of the feather. He fits into his hair for good luck.

Dusty also has an interesting choice of hunting gear. Most hunters are usually draped in full hunting regalia, whereas Dusty hunts in a shirt and shorts.

Dusty grew up in Sarasota County. This is where he discovered his love for hunting reptiles. Even as a young boy, Dusty would go in search of little snakes and, on some occasions, crocodiles.

Eventually, he transitioned to larger and more dangerous snakes such as pythons. Dusty work has made him one of the most renowned hunters in Southern Florida. Over the years, he has earned the nickname ‘the Wildman.’