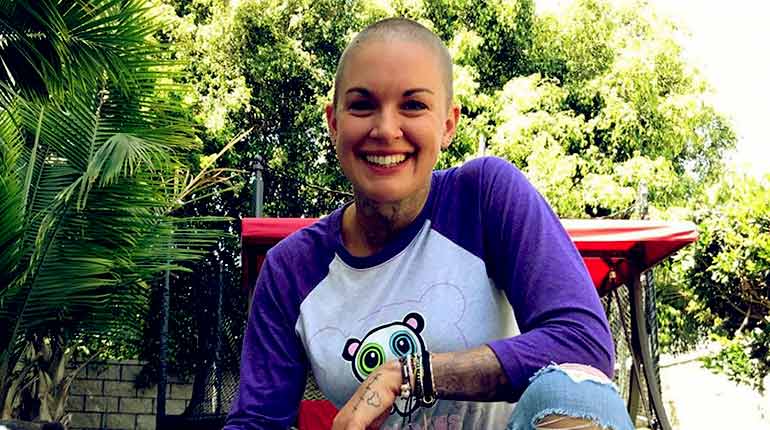 Amanda Giese is a celebrated American humanitarian and reality star. Her love for animals is well documented, and Amanda has built a very stable career around it. Amanda set up a non-profit organization that aids in her endeavors. Read this Amanda Giese Wikipedia type bio.

The Animal Planet star works with an array of professional veterinarians who help treat animals with varying medical conditions at the center. Get to learn more about Amanda Giese as we take a broad look at the humanitarian’s biography. You’ll also meet her husband as we explore her personal life. Amanda Giese is also bald. Does she have cancer? Find out.

Who is Amanda Giese?

Amanda Giese is well known for her work on the Animal Planet Documentary-show, Amanda, to the Rescue. It features Amanda and her children as they go about caring for abandoned dogs. The popular series is in its second season, having premiered back on October 28th, 2018.

The second season saw Amanda partner with Pit Bull and Parolees, a similar show on the network. Amanda and Tia Torres, who stars on the series mentioned above, made their way to New Orleans to rescue a dog recovering from a gun-shot wound.

Amanda’s work on the show has been recognized for numerous awards. The most recent was the Humane Society’s Genesis Award for Outstanding Reality Series in 2019.

Amanda Giese is also the president of the founder of Panda Paws Rescue. Her organization facilitates the rescuing, care, and rehabilitation of injured and abandoned animals. Most of the time, Amanda and her team deal with stray dogs without owners.

Panda Paws Rescue strives to end the abandonment and abuse of all animals. These animals cannot speak up for themselves, so the organization bears the burden of advocating for their rights.

Their most recent rescue was a dog named Chester. The two-year-old puppy was found with a horrible skin condition that would not go away. He was brought to the clinic, where they discovered that the dog was allergic to most meals. Amanda and the team designed a special diet that helped the dog get healthy again.

Amanda Giese also partners with the friends of Michigan foundation, which seeks to get animals adopted into loving homes. They have strict rules and regulations which ensure that the pets are well taken care of.  Reality television has also made Amanda a social media personality. She has thousands of followers on both Twitter and Instagram.

Sources estimate that reality stars who feature on the Animal Planet Network reportedly rake in an average of $5K for every episode they appear in. As the lead, it stands to reason that Amanda would earn even more. As such, Amanda Giese’s net worth stands at $1 million.

The humanitarian, Amanda Giese, came into this world on the 26th of January 1983 in the United States of America. She is 36 years old at the moment. However, with a birthday on the horizon, Amanda will turn 37 soon.

Does Amanda Giese have cancer?

This is a question that has been raised by several of Amanda’s fans. It can be attributed to her bald head. Amanda has maintained a clean-cut look throughout her show. This has left many wondering if Amanda Giese had cancer.

As you know, chemotherapy is one of the treatments recommended for cancer patients. The aftermath of this method of treatment is rapid hair loss. Their lack of hair characterizes most cancer patients at the hospital.

This is why a lot of people have wondered whether the disease afflicts the humanitarian. Another reason why audiences might have been under the assumption she was sick is the fact that she experienced a decline in health while filming. Amanda did not want to cut this part out of her show as she wanted the audience to relate to her as a real person. However, we would like to come out and clarify that Amanda Giese does not have cancer.

Why is Amanda Giese bald?

Amanda Giese’s hairstyle is a choice and fashion statement. A lot of people assumed that Amanda was sick, but this was not the case. Amanda enjoys the distinctive look which the haircut gives her. While going bald isn’t a look that suits everyone, Amanda Giese seems to be able to pull it off. Alongside her tattoos, blue eyes, and great physique, it gives her a unique appearance.

Before Amada switched to her trademark bald look, she had dark, short, shoulder-length hair, which was also wavy. This was back in her youth, most likely in her twenties. Amanda Giese did not also have her distinctive tattoos at the time. She would then switch to a bob-cut in 2014. This meant that she trimmed most of the hair at the sides, letting everything else grow out.

While filming the second season of her reality show, Amanda went through a significant change. She lost approximately 35 pounds in a year. Amanda also had a substantial increase in muscle mass to go with her new body.

The 36 years old humanitarian is not a married woman at the moment. Sources say that she has been in several long-time relationships before, however.

The very first was reported with a man named Gary Walters. He is a professional photographer. It is unclear when Amanda Giese and Gary Walters started dating. We did learn that the couple had two children together, though.

Amanda Giese and Gary Walters met in a bar while she was working as a go go dancer. Gary approched her and they soon started dating.

Most recently, Amanda was engaged to a man named Jeffrey Roy. This came after the two had been dating for several years. Like most of her relationships, Amanda kept everything under wraps. There isn’t much information available on their prolonged romance.

When the second season of her reality show premiered; however, Amanda revealed that she and her partner had split up. He had been helping with her non-profit at the time but stepped out of the role after they stopped seeing each other.

The reality star Amanda Giese is the mother of two children. Her first child was Beast Giese, who came into this world back in 2003. Beast is turning 17 years old this year. Despite his young age, he is heavily involved in Panda Paws Rescue, her mother’s organization.

Beast also aspires to join the military one day in the future and defend his family.  His sister, Jade Giese, was born two years after him. This would mean that Jade is about to turn 15 years old this year. Jade, on the other hand, wants to be a vet surgeon. Both of Amanda Giese’s children were fathered by Gary Walters.

Amanda Giese’s medium of choice is Instagram. The 36-year-old reality star presently has about 69,000 followers on the platform. On her page, you’ll find several pictures of some of the dogs she has rescued, further echoing her love for animals. Amanda also has pictures of other animals such as porcupines on her page.

Being a social media personality, Amanda Giese uses her massive following to address socially relevant issues, such as her support for the LGBTQ community. Amanda has posed for several pictures with members of the LGBTQ group on her page. In regards to her twitter handle, Amanda has over three thousand followers. Amanda’s Facebook page, on the other hand, revealed that besides being a lover of nature, she is also a whiskey connoisseur.

Amanda Giese is a relatively private person. As such, most of the details surrounding her early childhood have not been uncovered yet.

We were not even able to determine the name of her parents and siblings. Stay tuned for more updates, however. We were able to learn that her love for animals is something that stems right from her childhood. Amanda rescued her first animal, a kitten when she was just 11 years old. After that, she was hooked, and rescuing animals became her passion.

This was especially evident when Amanda Giese dropped out of medical school to set up her foundation. She knew that she could do more good out there. Setting up the foundation was not easy. She worked at a night club as its promoter.