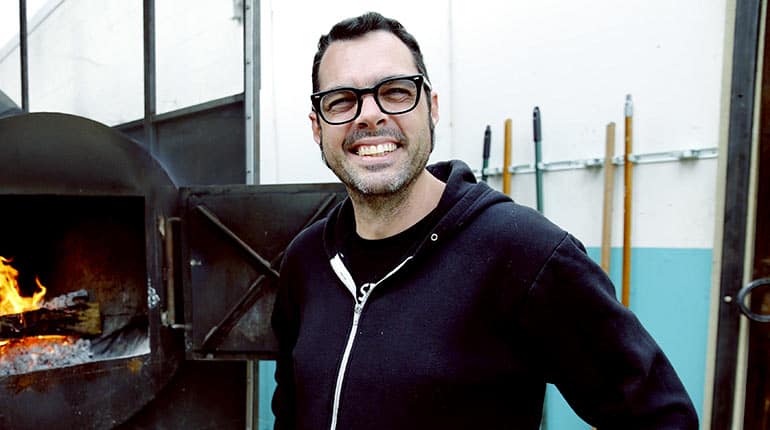 Today. Let us talk about a James Beard Award winner, a great chef, actor and also a producer at the same time. Yes! We are talking about the owner of the very famous Barbecue Resturant, Aaron Franklin. Read this to know Aaron Franklin’s net worth. Also, meet his wife Stacy Franklin.

Aaron was born on the 17th of Dec 1977 in Bryan, Texas, United States. Aaron Franklin is one of the greatest producers and also a brilliant actor. He has been part of the tv shows like ‘BBQ Pitmasters’, etc. He has also bagged James Beard Award for Best Chef: Southwest in 2015.

His parents also own a Barbecue stand in Bryan. So, there is no doubt in realizing how this chef has been inked into his blood. He is also the co-author of the best selling book, ‘Franklin Barbecue’, ‘A Meat-Smoking Manifesto’, and Franklin Steak. He has also been the host of the show, ‘BBQ with Franklin’.

James Moody and Mike Thelin joined hand with Aaron and the trio soon launched “Hot Luck Fest” in 2017. This fest was all about the annual food and music festival. Also, Aaron launched ‘Loro’ which is an Asian smokehouse and bar, teaming up with the chef Tyson Cole( also a James Beard Award winner) in 2018.

Aaron Franklin was unaware of where he will land up in the coming future. He just had an idea of opening a small Barbecue business with his wife, Stacy Franklin in Austin in 2009.

He had no single idea about his forthcoming fortune as his interest was all in barbecue cooking in his backyard. It is also in the news that Aaron is soon going to launch ‘Franklin Barbecue Pits’ in 2019. Even the ex-President Obama is impressed with this mouth-watering brisket.

His wife’s name is Stacy Franklin. She is also his business partner who supports her husband in every circumstance. The love between the duo is priceless. They together have a daughter named, Vivian (3 years old).

Though Aaron Franklin’s net worth is yet to be revealed we can assume from his going business, he must be making a huge amount. His Barbecue makes at least 650k pounds of meat in a year.

Along with Obama – Jimmy Kimmel, Anthony Bourdain, and Gordon Ramsay are also a huge fan of these briskets.

There is always a long queue of customers for barbecue since morning at 9:30 am. Even it is rumored that they bribe the sellers with $300 for cutting off the line.