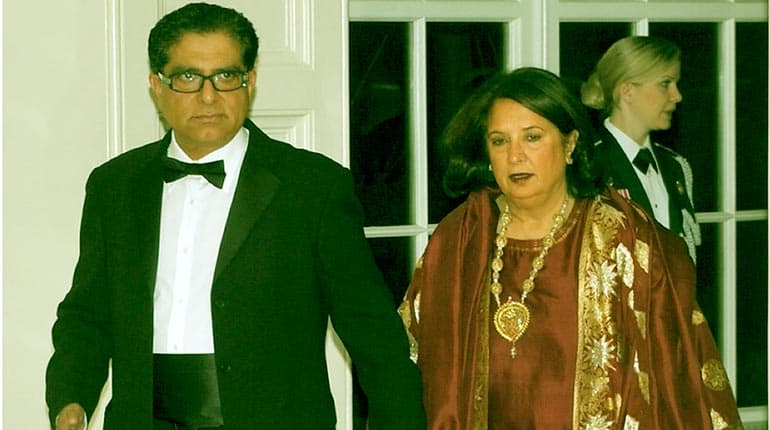 Deepak Chopra is a New Delhi native who immigrated to the USA later on in his life. He is at the forefront of the New Age Movement. Deepak believes that the less you open your heart to people, the more it will likely suffer. He is also the author of several self-help books such as ‘Quantum Healing.’ Deepak is recognized as an authority in the field of mind-body healing. In this review, get to know a little bit more about Deepak Chopra’s family as we introduce his wife  Rita Chopra and kids.

Who is Deepak Chopra?

Deepak Chopra is a medical professional, writer, and television personality. He is the son of a renowned cardiologist, Krishnan Chopra. Rather than following in his father’s footsteps, he wanted to set out on his path. To that end, he joined the All India Institute of Medical Sciences in New Delhi, before finally moving to the US.

At the time, he was pursuing a residency in Boston, with barely any money in his pockets. Deepak Chopra’s rapid rise to the top was halted once he became disenfranchised with western medicine’s over-reliance on over the counter pills. Discovering transcendental medicine completely altered the course of his life.

Working alongside Maharishi Mahesh Yogi helped him leave his occupation at a New England Memorial Hospital. Deepak instead switched to peddling products like oils and herbal teas at a company he co-founded. He became well known amongst celebrities, working with people like Michael Jackson, Elizabeth Taylor, and Donna Koran.

Eventually, he launched the Chopra Centre for Well-being. Around this time, Deepak’s writing career was shaping up very well. He was at the forefront of the wave of self-help books. It came with successful titles like The seven spiritual laws of success and The Book Of Secrets.

The 73-year-old doctor is married to his wife Rita Chopra. Most details surrounding their relationship are hard to come by. This is because the two are relatively private people. We can estimate that they met sometime in the sixties, before eventually tying the knot in 1970.

Most notably, the two got married right before Deepak moved to America. Deepak and Rita remain married to date, even after half a century together. They have two children together; Mallika and Gotham Chopra. Deepak Chopra and his wife presently live in Manhattan. There have been no incidents regarding Deepak and Rita Chopra’s private life to report.

Deepak has made his fortune primarily by working as a wellness guru and writer. To date, the 73-year-old author has over fifty published works. All of these made it onto the New York Times’ Best Seller’s List. Additionally, Deepak was also the president of the American Association of Ayurvedic Medicine. It is a position that paid well. As of 2020, Deepak Chopra’s net worth is estimated to be $170 million.

Mallika Chopra is the daughter of Deepak Chopra and his wife Reeta Chopra. She was born on the 24th of July 1971. As we write, Mallika is 48 years old. Mallika and her brother were raised in Lincoln, Massachusetts. It is where she enrolled in the Concord Institute. Mallika went on to attain a degree at Brown University, before later moving on to Kellogg School of Management.

The latter earned her a post-graduate degree in Education and Psychology. These distinctions came from Columbia College. After completing university, Mallika Chopra launched her website, where she focused on Lifestyle and helping her members to improve their lives.

Mallika followed in her father’s footsteps. She became not only a motivational speaker but also a writer and entrepreneur. Mallika Chopra has authored five successful books to date. These include titles like Just Breathe, 100 Questions From My Child, and Living With Intent.

In addition to this, Deepak Chopra’s daughter Mallika also frequently writes for the Huffington Post, one of the most reputable news outlets in the world. Mallika has had a long, storied career.

Back in the 90s, she even worked alongside the King of Hip-hop, Michael Jackson, to launch the Heal The World Foundation. In relationship to her personal life, we learned that Mallika is married to Sumant Mandal. They tied the knot back in1996, and remain together 24 years later.

Guatama Chopra is the son of Deepak Chopra and his wife, Reeta Chopra. He is a businessman, filmmaker, and writer. Gotham was born on February 23rd, 1975, in Boston, Massachusetts. It makes him 45 years old, three years younger than his sister.

When he ventured into television, Guatama officially changed his name to Gotham. Alongside his sister Mallika, the two are major stakeholders at Chopra Media. The savvy businessman also partnered with Sharad Devarajan to acquire Virgin Comics, which they later nicknamed to Liquid Comics.

Gotham made significant headway in his film career back in 2012. He directed the critically acclaimed documentary, Decoding Deepak. It was based on some of the work which his father did.

Three years later and Gotham was at it again with the release of the film, Kobe Bryant’s Muse. The very same year, the renowned director released a multi-part documentary that talked about the impact of sports in the modern world. In addition to this, he helped produced the Love Guru and Bullet Proof Monk.

Gotham is also an award selling writer. Some of his most critically acclaimed books include Walking Wisdom. Gotham is married to a woman named Candice Chen.