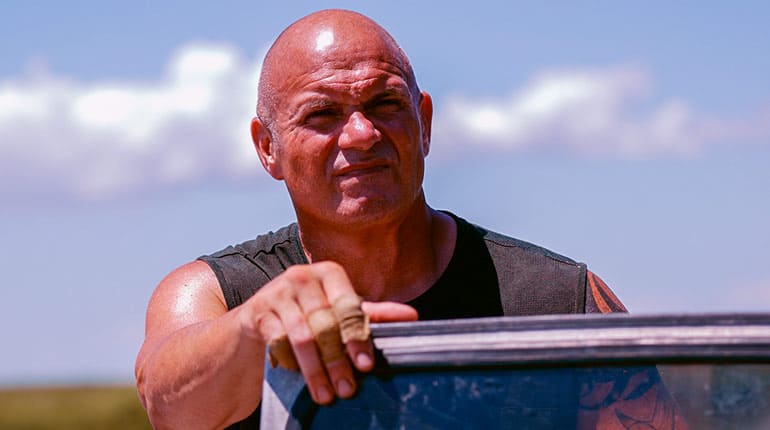 Ronnie Adams is a hunter and television personality who operates along the Bayou. It is something he has been doing for several years now, dating all the way back to his childhood. The 6 ft 5 History channel actor’s father taught him everything he knows about trapping.

Presently, he works alongside the likes of Ashley ‘Dead Eye’ Jones to help curb the problem of gators in the Bayou. So, is Ronnie Adams married? Here is everything you need to know about his biography.

Who is Ronnie Adams?

Ronnie Adams is a reality TV star who appears on the fantastic show, Swamp People. The swamp in the deep south of Louisiana is one of the last frontiers in the USA. It, therefore, came as no surprise when the Discovery Channel decided to seek out swampers who make their yearly income culling gators.

The show follows them as throughout the state-mandated gator hunting season. They have a month-long period, which is crucial to their financial survival. It is no work for the faint-hearted as gator trapping is perhaps one of the most dangerous jobs in the world.

In this rapidly evolving world, Ronnie from “Swamp People” and his fellow hunters have stuck to the old was. The show features other hunters like Troy Landry and Dead Eye Jones. We were treated to the first episode on the show back on August 22nd, 2010, on an episode titled ‘Big Head Bites It.’

The Discovery Channel series is in its 11th season at the moment and fast approaching the 200 episodes mark. The Swamp People reality star was pared with Dead Eye in the series’ current season. They make quite a formidable duo; Ashley is one of the best markswomen all round, and her partner brings an abundance of experience to the table.

Despite his size and years of experience, the Louisiana Bayou Hunter has had his fair share of injuries while working. He tore a bicep as he was trying to handle a 600-pound alligator.

Ronnie Adams was born on the 14th of February in Violet, Louisiana. He is a love baby and celebrates his birthday on Valentine’s Day! However, the exact year of his birth remains a mystery. A look at his picture tells us that he is in his mid-50s at the moment. His eccentricity, charisma, and line of work echo his Aquarius star sign.

Ronnie Adams from “Swamp People” Is Married to a wife Jen Smith.

The 6 ft 5 gator trip is engaged to a woman named Jen Smith. She is a native of Glen Jean, West Virginia, but presently lives in Abita Springs, Louisiana. They, in all likelihood, met after her move to the South. The Gator hunter’s fiancé works for Northshore Orthodontics; this is an institution that does dentistry work on both children and adults.

According to her Facebook page, the couple started dating back on the 27th of March 2019. Four months later and they were already engaged! Ronnie popped the question on the 16th of June 2019.

The entire world is on lockdown at the moment, yet this has not stopped wedding plans from carrying on. On the 8th of April, Jen Smith posted on Facebook that her wedding dress had finally arrived. It is safe to say that these two will walk down the aisle as soon as the COVID-19 pandemic clears up. Check back for more updates.

The Swamp People Gator trapper is very active on Facebook, where he has just fewer than 5,000 friends. His page also informs us that he is an agent at Southport Agencies, which is a local business in Louisiana. In addition to this, we also learn that he is the proprietor of Elite Airboat Hog Hunting, LLC.

A recent post he made also echoed his close relationship with the Landrys, who feature on the show alongside him. He talked about the great experience he has had working with them on the discovery channel show.