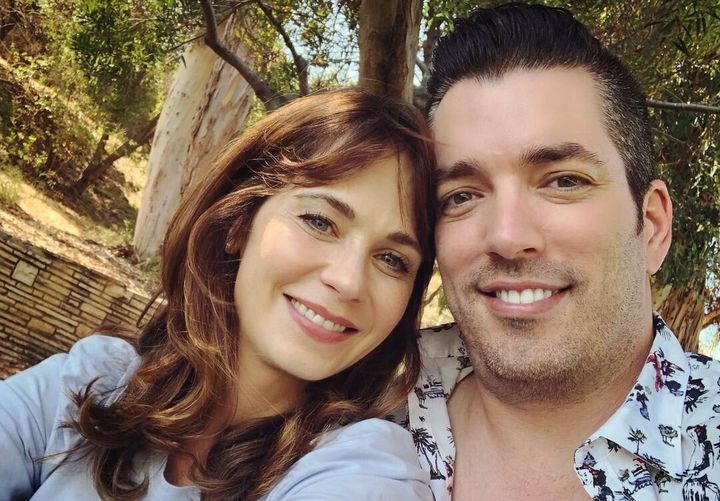 While they don’t get to work together all that often, the couple could hypothetically see a change on the horizon in that particular respect. The HGTV star has revealed he may have a great idea for a show that could bring him together with Deschanel on the small screen.

Ever since fans first learned about the relationship, many have been begging for Jonathan Scott and Zooey Deschanel to do something together in a professional capacity, and followers may get their wish if Scott has his way. The Property Brothersco-star gave Entertainment Tonight a peek into a proposed concept from his twin brother Drew, saying:

Drew actually came up with a good concept, because Zooey is obsessed with real estate. It’s a show where Zooey looks online. We find [random] houses … and fix them up. Is someone going to say no if Zooey Deschanel just walks up to their door and knocks on it and says, ‘Hey, this guy will fix your house if you want it!’

Drew Scott’s idea sounds like a brilliant one. Viewers would get to see Jonathan Scott and Zooey Deschanel not only being cutesy in front of a laptop, but also being cutesy while renovating fixer-uppers.

Like Scott implied, who wouldn’t be interested in Deschanel coming into their home with offers of fixing it up?

Fans of the couple got a preview of what that show might look like courtesy of Deschanel’s appearance on her boyfriend’s other renovation series Celebrity IOU. So, doing a renovation show together might take their relationship to the next (split) level.

But it’s not like Jonathan Scott and Zooey Deschanel have been shy about their relationship outside of their TV responsibilities, though. Deschanel and Scott have gushed over each other in interviews as well as on social media, especially on Deschanel’s favorite holiday – Valentine’s Day. As much as followers love their relationship, the couple has maintained some privacy while speaking on the reality of dating another celebrity. The beloved couple recently celebrated their second anniversary on Instagram after meeting on Carpool Karaoke.

Jonathan Scott and Zooey Deschanel’s relationship is proof the HGTV love is strong, and it’s extended to other Property Brothers-adjacent shows as well. Ant Anstead met his current girlfriend Renee Zellweger while shooting the first episode of the spinoff Celebrity IOU: Joyride.

Much like Scott and Deschanel, Anstead and Zellweger remained very private about their relationship in these earliest days with one lone comment from Anstead (and a joke or two from Drew Scott about how he wooed the Oscar winner). The new couple almost broke the internet with a peek into their date night, so one can only hope more is on the way.

Jonathan Scott’s brother Drew found love with his wife Linda after working together on Property Brothers, so clearly the HGTV stars are proof that not all relationships born from reality-based TV are meant for doom and gloom. Now if we could just get some network executives to give some consideration to Zooey Deschanel’s 500 Renovations Of Summer or whatever they would call it.