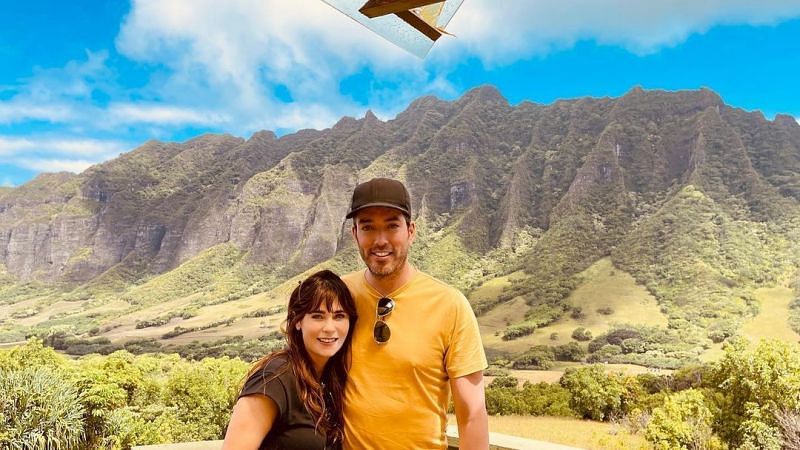 Jonathan Scott can’t get enough of his “special” vacation with Zooey Deschanel.

On Sunday, the 43-year-old Property Brothers star shared a series of photos while vacationing with Deschanel, 41, in Oahu, Hawaii, including selfies of the two and snaps of their tropical views.

“There are those times when we feel the need to hold our loved ones even closer. This was a much needed, special trip.” Scott captioned the Instagram post.

Earlier this month, Deschanel and Scott hit a milestone in their relationship, celebrating two years together with sweet messages on social media.

The New Girl star shared a selfie of the couple grinning and posing cheek to cheek, writing, “2 years and still my favorite 😍,” before Scott commented under the post saying, “I knew two years ago that you were gonna change my life 😘.”

The two first met on the set of James Corden‘s Carpool Karaoke while filming a segment with their respective famous siblings in the summer of 2019. Scott previously told PEOPLE that “there was chemistry right away” during their shoot. They made their relationship public in September of that year.

Never miss a story — sign up for PEOPLE‘s free daily newsletter to stay up-to-date on the best of what PEOPLE has to offer, from juicy celebrity news to compelling human interest stories.

The couple stayed home together for much of last year during the COVID-19 pandemic, with Scott telling PEOPLE in April 2020 that Deschanel was “the perfect person” to quarantine with.

“I’m blown away, it’s really been wonderful,” the HGTV star said, adding, “I think we’re just taking it one day at a time here and it’s a crazy thing nobody would have predicted. But I’m glad that I’m with somebody that I love, and somebody who’s so talented.”

Deschanel, who currently hosts ABC’s The Celebrity Dating Game with Michael Bolton, told PEOPLE last month that she admires her boyfriend’s passion and environmental activism, looking back on how the two clicked the very first time they met.

“I remember actually when we first met, he sent me his documentary and I was like, wow, we are so aligned on this level,” the actress said. “Because we both really care about this one issue, but have different areas that we focus on.”

Deschanel was previously married to Ben Gibbard, the lead singer of Death Cab For Cutie, and producer Jacob Pechenik, with whom she shares two children. She announced her split from the latter in 2019.

Scott was also previously married to Kelsy Ully. The former couple got married in 2007 and split in 2010.